Global Ammonium Phosphate Market is estimated to reach $49.3 billion by 2024; growing at a CAGR of 3.8% from 2016 to 2024. In terms of volume, the market is expected to reach 95 billion tons by 2024, at a CAGR of 4.4% from 2016 – 2024. Ammonium phosphates are having various applications such as water treatment chemicals, fertilizer, flame retardant, and foods & beverages. These are offered by manufacturing companies in various forms such as mono-ammonium phosphate (MAP), di-ammonium phosphate (DAP) & ammonium polyphosphate. Growing end-use industries is anticipated to increase the growth of ammonium phosphate market over the forecasted period. Rising investment by key agriculture driven countries and its growing usage in animal feed & in many other industrial applications would boost the market. 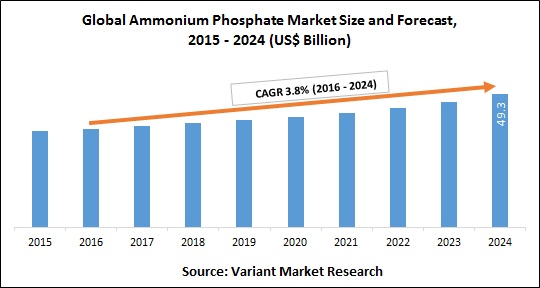 Increasing demand of flame retardants, several industrial applications of ammonium phosphates, and rising demand of fertilizers in agriculture-driven countries of the world are the factors driving the growth of the ammonium phosphate market. Though, strict rules against the usage of chemical fertilizers may hinder the growth of the market. Moreover, advancement of formulations for effective techniques as drip irrigation and fertigation which offer minimal use of fertilizers, and growing agriculture sector might provide with several growth opportunities in the forecasted years.