Ammunition Market is estimated to reach $25 Billion by 2024 with CAGR of 6.0% between 2016 and 2024. Ammunitions are objects that can be shot from a weapon and are highly explosive. Ammunitions or cartridges are used in an assortment of firearms ranging from short pistols to heavy automatic weapons, also known as machine guns. Almost all the weapons require some kind of ammunition to operate. Standardized specifications for the size, shape and ballistic performance have been set for the majority of military and civilian ammunitions. Expansion rate, physical size, shape of the powder particles and the stability of propellant are important factors to be considered in the chemical formula used to produce ammunition. R&D is being conducted to develop smart ammunition and updated ammunition management system with improved cyber attack resistance. Ammunition can also be owned by civilians for personal safety or even for hunting. A number of nations as well as some of the U.S. states require ammunition purchasers to have valid identification cards or even a firearms license. This is to reduce the gun violence or gun assaults which pose a significant risk to life of common people. 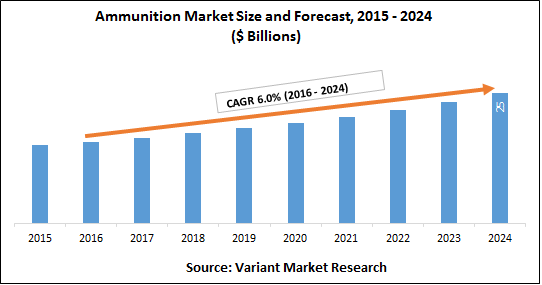 Increased spending by government on military ammunition and rising threats from terrorist and cross-border disputes fuels the demand for the global ammunition market. Moreover, growing popularity of shooting as a sports activity and rising demand for ammunition used for training the various armed forces also boosts the growth of the market. However, lead-based ammunition used for hunting and shooting would pose danger to the environment and toxic to wildlife and decreased spending on defense budget by few developed countries could pose challenge for the market. Furthermore, green bullets, non-lethal weapons and ammunition, would provide opportunity growth for the market in the upcoming year.