Global Directed Energy Weapons Market is estimated to reach $48.5 billion by 2024; growing at a CAGR of 25.4% from 2016 to 2024. Weapon that emits or releases focused energy and that can transfer that energy to damage or destroy a target is termed or known as directed energy weapons (DEW). These are known to produce extremely powerful beams or rays. They mostly use single or only one optical system to simply focus it in the target or to track the target. Additionally, these rays can be effortlessly re-directed by mirrors to harm the targets that are not noticeable from the source. Lasers are considered or known to be most matured type of DEW weapon. 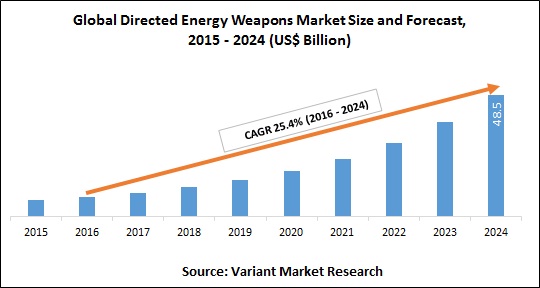 The global directed energy weapons market is primarily driven by factors such as legal impacts and regulations of DEWs, need for precision & accuracy, and need of laser especially in areas like navy. However, insufficient funding and arms transfer policy may hinder the market growth to a larger extent. On the other hand, growing defence expenditure by many countries as well as technological developments might provide with several growth opportunities in the forecasted years.