Global Non-volatile memory (NVM) Market is estimated to reach $115 billion by 2025; growing at a CAGR of 10.2% from 2017 to 2025. Non-volatile memory (NVM) is a type of computer memory that has the capability to hold saved data even if the power is turned off. Unlike volatile memory, NVM does not require its memory data to be periodically refreshed. It is commonly used for secondary storage or long-term consistent storage. It is electrically programmable and erasable to store changes in a particular location within the storage device and able to retain that change even after power outage. Presently, non-volatile memory finds its wide application in data centers and consumer electronics, which enhance the data transfer speed and prevent data loss. Hard disk, flash memory, and magnetic tape are the most common examples of non-volatile memories. Rising demand for non-volatile memory in connected and wearable devices, increasing demand for high speed, highly scalable and low power consumption memory devices, and growing usage of next generation NVM in mobile phones to enhance customer experience are the primary factors to drive the growth of the global non-volatile memory market. However, high design cost, and low write endurance rate are the major drawbacks hindering the market growth. Moreover, growing adoption of high-end computing, servers, and data centers, and emergence of advanced storage technologies such as MRAM, NRAM 3D XPoint, and SONOS are expected to present potential growth opportunities over the forecast timeframe. 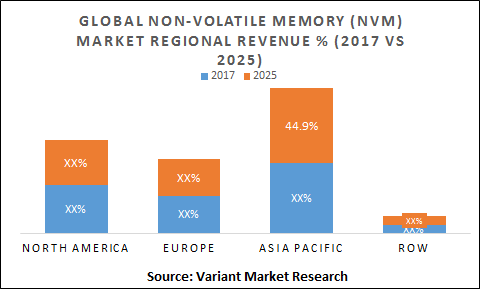