Global Marine Propulsion Engine Market is estimated to reach $15 billion by 2024; growing at a CAGR of 4.6% between 2016 and 2024. Marine propulsion is a system that creates thrust and enables ships to maneuver themselves in water. Several innovations have led to the development of advanced mode of propulsion engine that would ensure safety of the marine ecosystem coupled with cost efficiency. Various types of propulsion engines are used in ships, among which diesel propulsion is most commonly used, converting thermal forces into mechanical energy. Introduction of liquefied natural gas (LNG) fuel engine in ships have also gained popularity in recent times due to their low emission and cost advantages. Over the years, numerous norms have directed the shipping industry to reduce the emission of greenhouse gases, contamination of marine water and others. For instance, The International Convention for the Prevention of Population from Ships (MARPOL) aims to regulate by preventing both accidental as well as pollution from routine operations such as contamination by chemical spill, oils, garbage and sewage, among others. Increasing investments & rapid innovations along with rising international trade between various countries fuel the growth of the global marine propulsion engine market. Moreover, rising focus on renewable energy sources owing to the depletion of conventional reserves and ever-increasing demand for crude oil also support the growth of the market. However, stringent rules & regulations over the alarmingly rising greenhouse gas & marine contamination, and high investment cost are expected to pose challenge for the market. Furthermore, rising emphasis on the use of renewable energy resources, biofuel & synthetic fuel and increasing spending on defense sector to strengthen their coastline security would provide growth opportunities is the coming years. 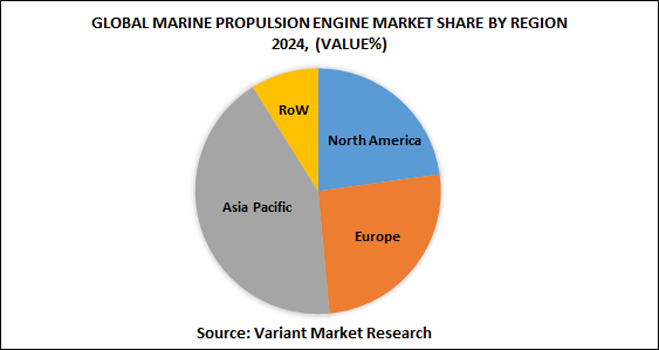